Our Fusion series guitars bridge the gap between the steel string and nylon string world. While traditional classical guitars are built with a wide and flat fingerboard, Fusion guitars have a narrower slightly curved, or radiused, fingerboard similar to a steel-string or electric guitar. The curve is not easily noticed if you just look at the neck of a guitar, but if you glance down the neck from the headstock to the bridge, you will see that the fretboard tapers at a slight angle. 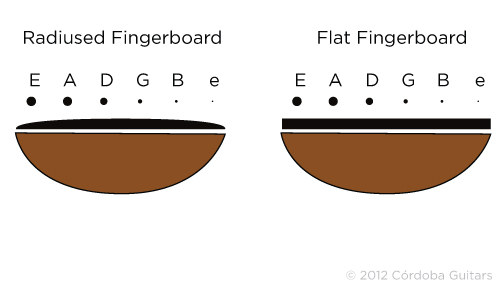 Cordoba Fusion guitars have a 16” radius. Put simply, if you were to draw a circle that follows the same curve as the fretboard, the radius of that circle would be 16”.So what’s so great about a radiused fingerboard? Even though the curve is slight, the extra space created for the top and bottom strings make “bending” strings easier. Steel string or electrical players might also like how the curve fits their hands since it will help them play a nylon-string guitar with their thumb over the top. However, radiused fingerboards aren’t for everyone. Classical players may prefer wider, flat fingerboards for certain traditional techniques.